skip to main | skip to sidebar

The interest in the connections between plants and people, referred to in my previous post of seven years ago (!),  culminated in an exhibition in 2018, Big Botany: Conversations with the Plant World, that I am very proud of.  Since that post I have also retired from my wonderful position at the Spencer Museum of Art and now I can talk openly about prints, even the ones I make myself!

Over Thirty years ago, I started a woodcut project inspired by the beautiful fifteenth-century blockbooks known as Biblia Pauperum (Bible of the Poor, a misnomer). These make use of a pictorial scheme that frames narrative images and text in a meaningful relationship, specifically, they comprise a typology that aligns New Testament themes with Old Testament prefigurations. I have seen a number of these rare books in person and their hand-made qualities sing through the deep embossing of the vigorously carved wooden blocks they were printed from. The hand-made paper and inks, which range from sepia to dark brown add to this tactile aesthetic.

I have always found the visual strategy of blockbooks (also "block books"), in which image and text are printed from one block of wood, to be very satisfying, so I had the idea of making an abcedarium (also "abecedarium," an endangered word, alas) for my daughters in a similar format, but not as a blockbook since each page would utilize multiple blocks. My plan was to make an ABC book of edible plants and hand tools, which I thought would provide useful information about important, disappearing knowledge; and this was before the internet had its way with knowledge! My daughters were three, one, and minus five years old at the time so I figured I had time to accomplish this.

My approach was to use one block for the framing motif, an architectural format (recalling the ancient Art of Memory, which also appeared as a blockbook, Ars Memorandi, but that is another story ... ) with windows framing the upper and lower case letters, images of the  appropriate tool and plant, and their names. Each of these was carved on its own block and inserted into the framing block for printing. So, this amounted to six blocks carved for each letter of the alphabet, set into a seventh, the framing block. Not too surprisingly, I was later to publish an article on historical aspects of this this printing strategy, “Modular Prints – A Special Case of the Assembled Woodcut in the 15th- and 16th- Centuries,” in Grand Scale: Monumental Prints in the Age of Dürer and Titian. New Haven: Yale University Press, in association with the Davis Museum and Cultural Center, Wellesley College, 2008: 87-98. 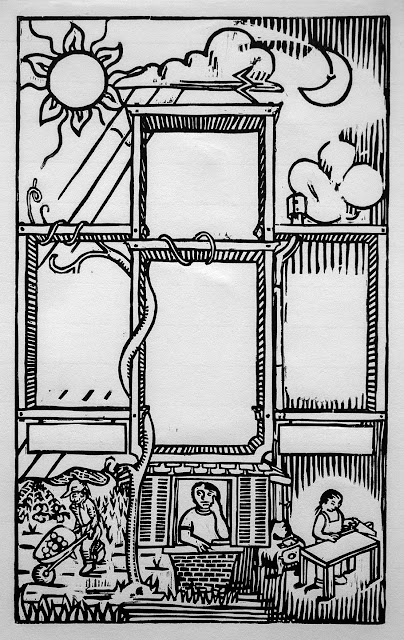 A few years after beginning this project I had only gotten up to the letter “F,” my daughters, now three in number, were growing up, and time for this project was getting harder and harder to find, so the project lay fallow for thirty years until last year when grandchildren inspired me to take it up again. 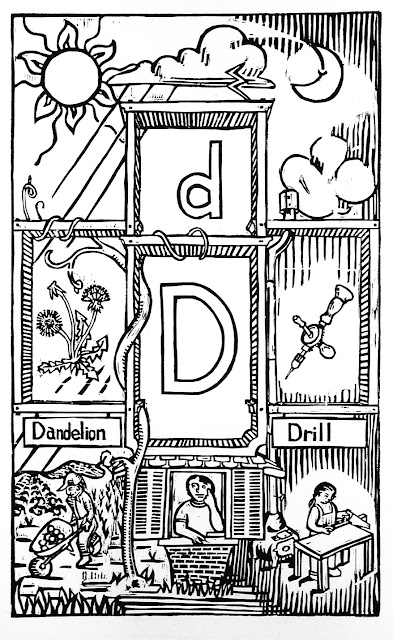 Somewhere between 1988 and 2019 the main block (a pine plank) warped and I unthinkingly glued it down onto a piece of plywood to keep it flat. In so doing I created more problems for myself, but more on that later. At this writing I am finishing the letter “Q” and I’m sure that the project will find some kind of conclusion in the course of 2020, though I doubt it will be as originally conceived. 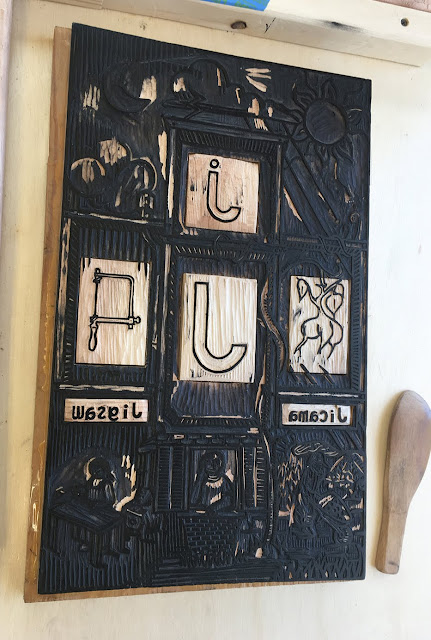